The latest to join the exit train from Global  Media Alliance is popular female broadcaster Caroline Sampson, known in the media landscape as “Mama Caro”, was the official host for “ShoutsOnY. The media star has officially ended her close to decade work stay at “Y107.9FM”.

Caroline Sampson, otherwise known as “Mama Caro” is one of the most amazing, super talented and popular gem in the Ghanaian media fraternity. 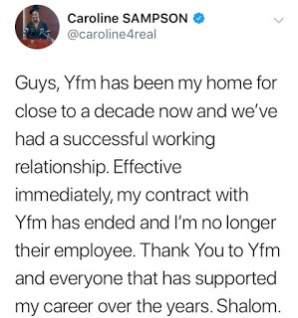 “Guys, Yfm has been my home for close to a decade now and we’ve had a successful working relationship.

Effective immediately, my contract with Yfm has ended and I’m no longer their employee.

Thank You to Yfm and everyone that has supported my career over the years. Shalom”.